It’s time for round two of story-telling. Let’s get this throwback Thursday rolling. For this story, I want to take it back to fall 2014, when I went clubbing for the first and last time. It started with a persuasive conversation with people who loved clubbing and knew me too well at the time.

“We’re going clubbing – you have to come.”

“Look, Taeyang is going to perform there tonight – you know Taeyang, right? Isn’t he in that boy band you listen to?”

Lightning, from the heavens. Striking me in the head. Changing my identity. In that moment, I became someone who would say yes to clubbing. And while I don’t regret saying yes for that one time, I also have no regrets about never going again.

Why, you ask, was this worth going just the once?

Three of us study abroad students went to club nb in Gangnam, or noise basement. If I recall correctly, it’s actually owned by YG Entertainment, or maybe just YG himself. There’s also an nb in Hongdae, but we’ll forget about that for the purposes of this story.

Note: riding the subway from Sinchon to Gangnam in what felt like twelve inch heels was a misery previously unknown to me. Never to be repeated.

I saw very strange things in that club. Very strange. But strangest of all, perhaps, was the moment in which the friend who knew someone who worked at the club decided to find the club worker. The worker had texted to say that we could come upstairs to where the VIP tables were – he had reserved one for his friends that night. We blindly followed the friend who knew the worker, not realizing that the friend also had no idea where she was going.

This is why we walked through a closed door to find ourselves standing next to Psy. Yes, Psy of Gangnam Style fame. This is also why I suddenly found myself in the grip of an extremely large and burly man. My two friends likewise were entrapped. The bodyguards demanded why we had entered, and upon finding out we were simply foolish foreigners who opened the wrong VIP door, we were kindly but firmly tossed out of the VIP area as Psy watched, probably quite amused.

Several painful hours of awful club air and sights later, Taeyang of Big Bang finally showed up and blasted the club with his magnificent vocal chops. He also served up his famous dance moves. I’d show you, but it was so loud in the club that the sound from videos I tried to record on my phone simply doesn’t exist. 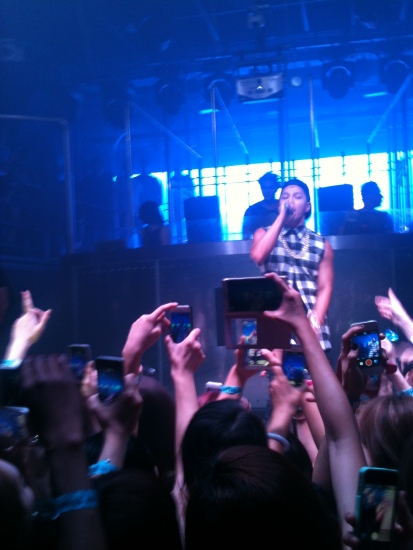 The one and only Taeyang.

Then, after Taeyang had melted back into anonymity and I was considering leaving (because why would I stay?), Psy decided to come out and really party hard. It was right before Chuseok, so he loudly shouted that he was in a good mood thanks to the holiday and wanted to put us all in a good mood as well. He sounded extremely drunk and incredibly happy. 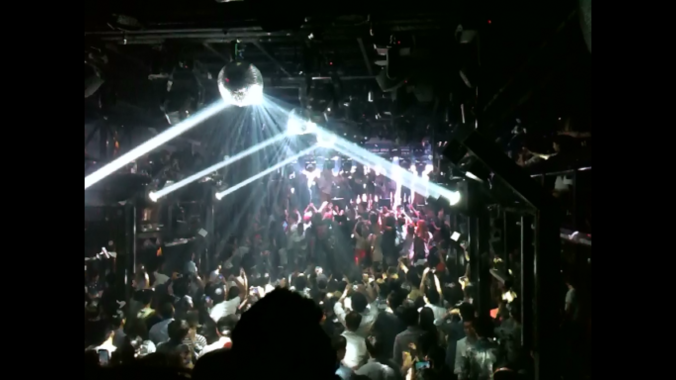 The club reminded me of those scenes in a zombie movies where the zombies swarm a car or a poor human. Psy was that poor human. Admittedly, he’s the one who invited them onto the stage. That’s on him.

This is how I came to dance to Gangnam Style sung live by Psy himself in a club in Gangnam right after Taeyang had serenaded us all with that tear-jerker of a song, 눈, 코, 입. Crazy, right?