Green. Everywhere, green. Green baked with South Korean sunshine. The fresh, clean scent of mountains clad with green tea bushes. And heat. Oh, yes. At ten in the morning, it was brutally hot in the green tea fields, and it was only getting hotter. 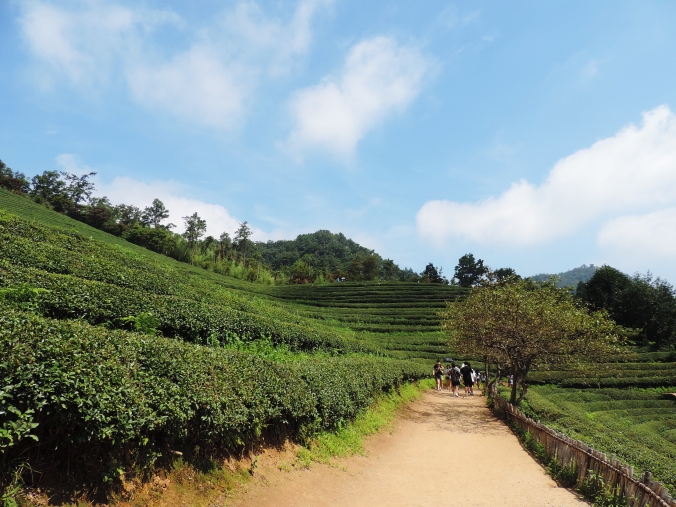 Rewind about twenty hours. It was midsummer in 2015. I was on a bus leaving Seoul, heading into the countryside in search of the famous Boseong Green Tea Fields (보성녹차밭). Four of us went, piling into a huge bus at 서울고속버스터미널 (Seoul Express Bus Terminal) in the afternoon. It was pitch-dark by the time we arrived in Gwangju at its own major bus terminal. Hardly anything was open but for a bar-like restaurant. We grabbed some food before enjoying a deep and much-needed sleep on floor mats with a few dozen strangers in a small jjimjilbang. There’s something about traveling on a bus all day that makes you so exhausted.

Bright and early the next morning, we bought our tickets for the next leg of the journey and grabbed coffee and donuts as the bus terminal filled with other travelers. Within a few more hours, the bus dropped us at a small bus station in a similarly little town. 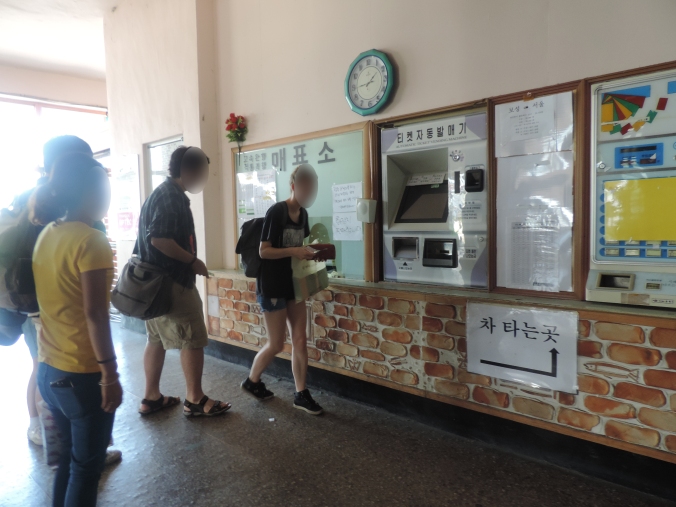 Rather than using the usual T-money card, we had to buy a separate ticket at the counter – only to discover that our bus was about to leave. We sprinted across the parking lot and caught the bus driver as he was closing the bus doors.

“Does this bus go all the way to the Boseong Green Tea Fields?” 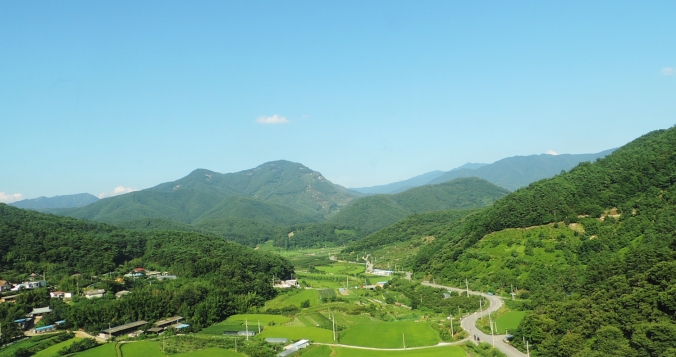 We clambered onto the bus and it took off down country roads, whipping up dirt and bearing us along, giddy with the success of not missing the bus. Behind us, a group of young Korean men started nudging each other and chatting about us in Korean. Of the four foreigners, two of us were female and two male – just friends or acquaintances.

My best friend and I tried to hide our laughter when the Korean guys dared each other to come up with some English to talk to us. At one point, someone yelled out, “Milk!”

If not for the incredibly kind bus driver, we’d never have gotten off at the right place, with people seemingly stopping the bus in the middle of nowhere each time to get off. After about 10-15 minutes, the driver stopped abruptly in front of a side road curving up a mountain.

“Hey, those of you going to the green tea fields! Time to get off!”

We piled off the bus, laughing. We started laughing even harder when it turned out that the group of Korean guys were also tourists at the green tea fields, so our two groups wandered along the road, never quite together, but never that far apart. Then it was as if people came out of the woods to join our pilgrimage to the land of the green tea, and we found ourselves among an impressively large crowd descending upon Boseong.

While buying our tickets, my friend and I overheard the guys earnestly debating whether or not we were here on a double date (we weren’t). Their verdict was that we weren’t – no hand holding or heart eyes to signal that we were.

At the gate, the attendants checked our bags, and then we were off! Green tea fields at last–

First we had to hike up part of a mountain, wind our way through the woods, pass a pond, and help the Korean guys take a picture.

“Can you…take a picture?” They approached my friend and me while our guy friends were walking somewhere else, and so we took the camera.

I wish I had a copy of the picture because their faces had such an entertaining mixture of shock and laughter. They clearly were trying to figure out how much we’d understood. We smiled, handed back the camera, and continued to the green tea fields. 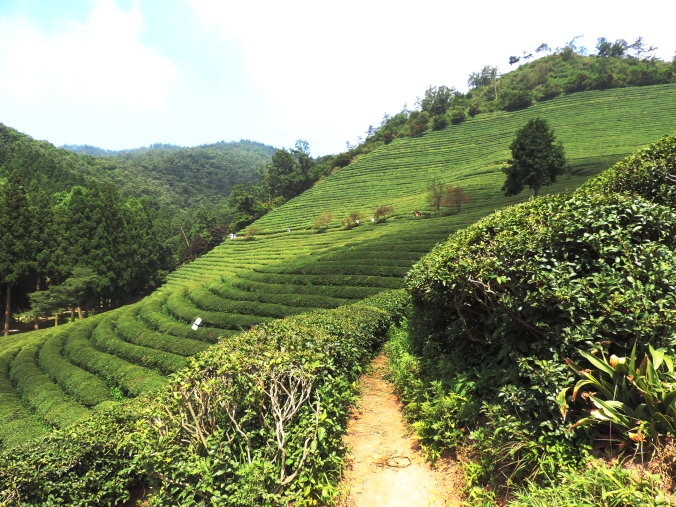 An Ocean of Green

The green tea bushes looked glorious, sprawled across the mountainside in huge rolls, and people struggled up the stairs in their middle like ants. The heat of the day sizzled around us and taking one step into the sun resulted in an immediate sweat outbreak.

But we weren’t to be deterred. We joined the fray, climbing up the mountainside and resting in the shade (when we could find it). We followed signs that promised an ocean view – waves! Ocean! Were we really that close to the sea, we wondered. Maybe our geography senses weren’t too good, we said. Let’s climb higher and see the sea! 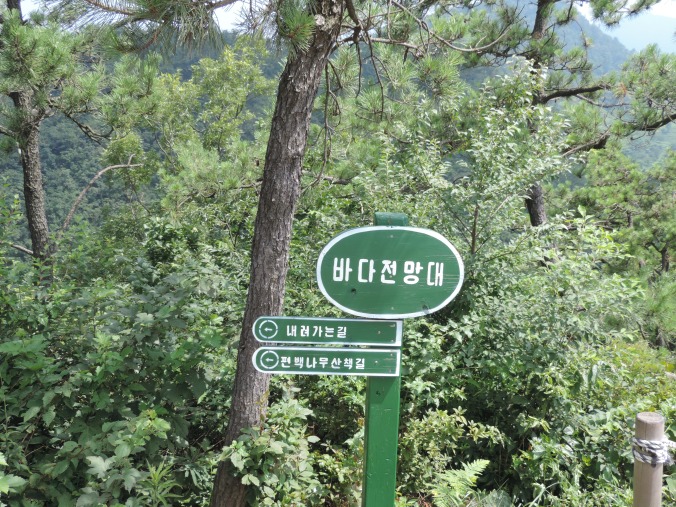 We summited the small mountain to find only forest. No sea. The sign that mentioned waves was a lie, apparently.* There were just trees and a steep path taking us back down and around to the starting point. The exhaustion from the climbing and the heat forced us to rest a bit before heading down.

At the bottom, though – green tea ice cream! Iced green tea lattes! Powdered green tea! Green tea cups! Green tea this, green tea that! We practically melted our way into the store. I spent an absurd amount of money (the quality of the tea was undeniable, but the pricing hit standard tourist-trap levels). 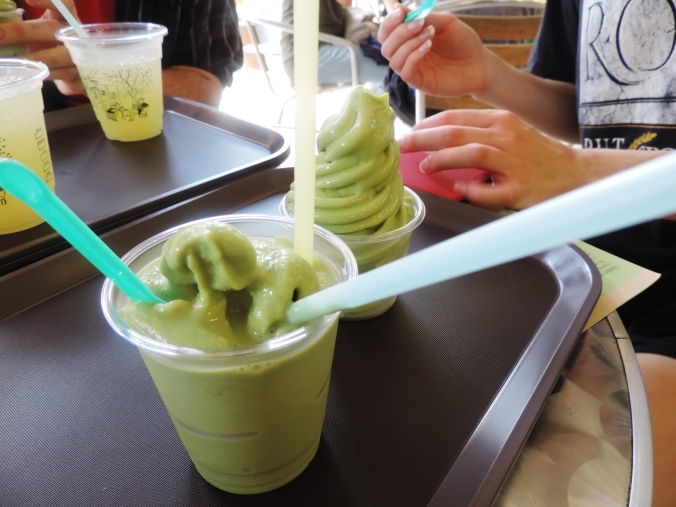 Somehow we found our way back along the forested paths, down the side road to the main, caught a bus back to the little terminal, and then discovered that our bus wasn’t due for a couple of hours. It wasn’t even quite noon because we’d arrived so early in the day. We wandered into a nearby restaurant and ordered (by accident) a veritable cauldron of purple-brown. 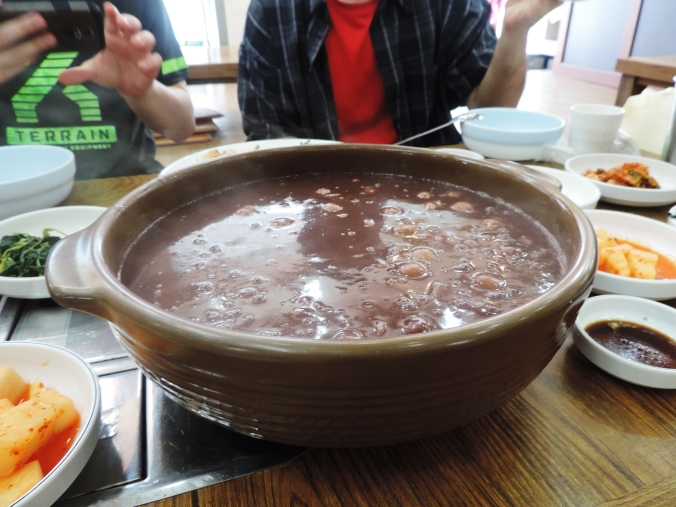 It was a hot day – have I mentioned it was hot that day? – and the food was positively steaming. The restaurant owners were so sweet and helpful, but we were still the foolish foreigners thinking we spoke enough Korean to order the right kind of food. At least we ordered this amazing seafood pancake! 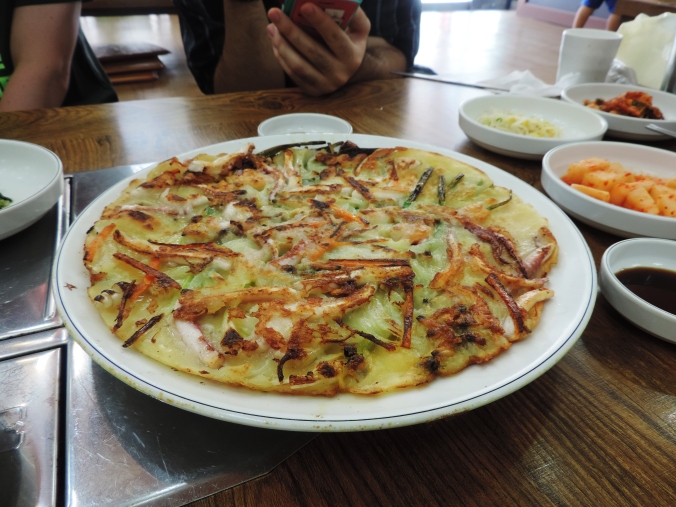 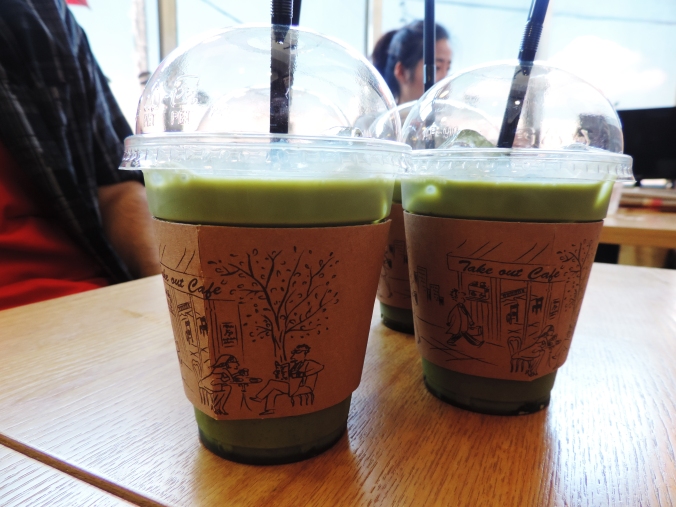 Finally, a bus that seemed like it might be ours arrived, ready to take us straight back to Seoul (thankfully). Somehow, in a haze of dried sweat and exhaustion, we reached the main bus terminal in Seoul and went our separate ways – me to my dorm in Sinchon and the others to their homes in various parts of southern Seoul. 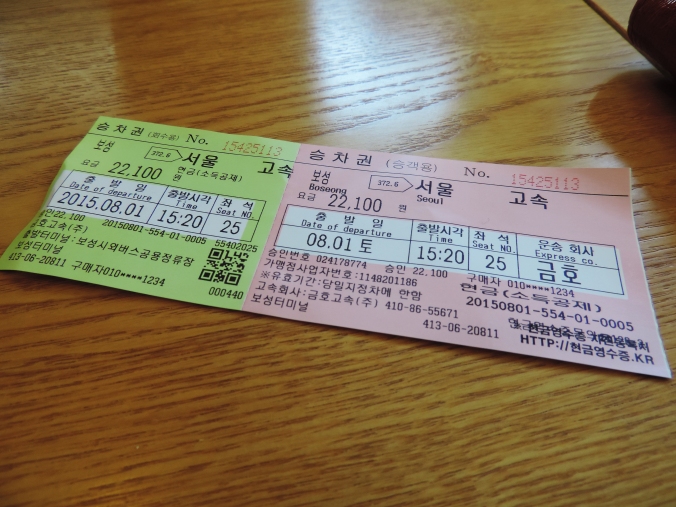 Worth that Won (원)

The experience of this trip to the green tea fields in the countryside was worth every Korean won and every drop of sweat. Not just because the green tea meant something to me, or because it was a fairly inexpensive trip for how far we went and what we did or because it was good exercise to climb up and down that mountain (with the major bus tickets only costing about 20~30,000 won one way, the minor ones only costing about 1,500, and the jjimjilbang only about 10,000 won, the biggest expense came from the green tea products I purchased at Boseong) .

No, it was worth it because it proved something to me. I think it proved something to my fellow adventurers, too. That we can survive somewhere out of our “natural” habitat. That we can go on an adventure and live to tell about it. That, more than a hundred miles from our safe and familiar realm of Seoul, we could thrive on the skills we’d built up.