If you don’t know the culture, you’ll never truly know the language. Don’t just look at a textbook. Watch the dramas, the movies. Listen to the music.

Language learning is all about engaging with the culture. And recently, I encountered a great example of why cultural knowledge (historical, current, popular – any and all forms of cultural knowledge) is key to linguistic competency.

In a group chat with well over a dozen native Koreans, I’m a quiet American. We mostly talk business opinions there – should we start this new side project, how should we respond to this request for promotion, what are our stats for last month. That sort of thing. It’s my unofficial training ground for the kind of Korean that I never got around to learning in college: business Korean.

So, sentence by sentence, I pull it apart. And then I run into a word I cannot find anywhere.

Eventually, I turned to my S.O., a native Korean, for help. He started laughing – not at me, but at the word. It’s a made-up word, one that the original sender invented on the spot (and thus put his own question mark in parentheses following it), but one that pretty much any Korean would guess the meaning of instantly.

궁예 (Gung Ye) is an actual person from Korean history – and his legendary portrayal in an old Korean drama, 태조 왕건 (Taejo Wang Geon) makes him a pop culture reference, too. He was a king and the rival to the historical founder of 고려, a Korean kingdom.

In the drama, though one of his eyes is covered with a patch, he can essentially see people’s feelings. He tells them not to lie – and kills them when they do, since he can see their true thoughts. 질, then, is a Korean word or syllable that can be equated to 행동 or action. 손질, which combines 손 (hand) and 질 (action/movement) is a noun that combines with 하다 to form a variety of meanings like to repair, to do one’s hair, to fix, to trim, and so on. All hand-based actions. Hands-on.

궁예 + 질 then becomes an action or an act of 궁예. The original sender was comparing himself to 궁예, saying that in a similar way that 궁예 did, he could sense or feel the interviewers’ real thoughts and feelings even though they weren’t actively conveying how they felt.

Funnily enough, I’d seen references to 궁예 many times prior to this, but I never knew his name or significance. For example, Kian 84, who’s a regular cast member for 나 혼자 산다, is obsessed. He watches reruns of the show while he creates webtoons – and sometimes he dresses up, too.

Korean variety shows are full of 궁예 references. You just need to look for that golden eyepatch. 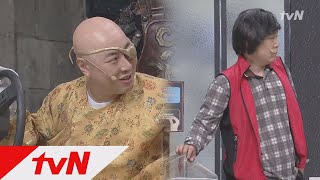 What other pop culture references have you learned recently?