Hidden in the interesting Korean phrase 짐승만도 못한 놈 is a Korean grammar construction that’s useful in a variety of situations – but I guess the original sentence is useful, too, if you want to insult someone…  END_OF_DOCUMENT_TOKEN_TO_BE_REPLACED

I’m planning to take TOPIK (Test of Proficiency in Korean) in November, so cue the intensive studying! But first, I need a study strategy.

For TOPIK, the highest possible level is 6, and the beginner level is 1. There are two versions of the test: the first version evaluates people who may have around a 1 or a 2, and the second version evaluates students from 3 to 6. The score is valid for two years, at which point you must retake it to re-authenticate your Korean proficiency level.  END_OF_DOCUMENT_TOKEN_TO_BE_REPLACED

셈이다 was one of those Korean expressions that just wouldn’t stick with me. Each and every encounter sent me back to the dictionary. Finally, my S.O. explained it to me in such a simple and helpful way that I’ve never had to look it up again. Let’s break it down.

Firstly, it usually shows up as ~은/는/을 셈이다. This enables a Korean speaker to attach a verb phrase to the front of it, i.e. 농담을 하는 셈이다 or 결혼할 셈이다.

Secondly, 셈이다 itself is actually a noun + verb.

Thirdly, 셈 is the noun form of the verb 세다 (to calculate or count). Just remove the ~다, add ㅁ, and you get 셈, or the “act of calculation/counting”.

When 셈이다 is used, it usually means that two things are being compared or equated. They are considered to basically be the same thing. In English, we might say something like, “I counted him as one of my friends.” The person in question and the identity of friend are one and the same (And coincidentally, if it helps you remember it, the pronunciation of 셈 and same are similar).

This is essentially verbal equation.

You might as well talk to a stone wall.

Here, the speaker is equating talking with their subject to talking to a stone wall. If you remember 셈이다 in its base form of “to calculate or count”, then you can remember its meaning more easily!

It started off as one of those far-fetched ideas. “Hey, it’d be cool to write a script for a Korean drama someday. Hey, what if I made the plot for my book into a webtoon?”

This isn’t a plot from one of my books, but sure – it could be remade into a K-drama someday. In the wise words of that kid from Angels in the Outfield, “It could happen!” Who knows? Why limit myself with fears of failure?

The title: ㄹtalk (aka Real Talk. Somewhere in the distance, my friends are all cringing at my never-ending obsession with puns)

The plot: A young Korean scholar from the late 1800s accidentally time-travels to modern America and masquerades as an exchange student. With the help of an American college student majoring in Korean Studies, he navigates college life in the U.S. and learns “real English” until he can figure out how to get back to his own time and country.

The goal: teach non-textbook English in a fun way

The format: webtoon (an online Korean comic) on Naver Webtoons 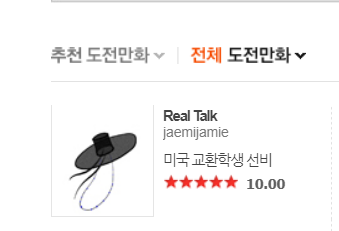 I won’t pretend to be the world’s best artist. I’m better with writing words than drawing faces, and sketching noses is my arch enemy. It’s been a lot of trial-and-error trying to find an art style that won’t drive my innate perfectionist mad. And I’m not sure where this webtoon will take me, or even quite sure where I’ll take this webtoon.

But that’s the fun of it.

It’s an open and uncertain adventure, and I hope you’ll join me here. Better yet, if you have a Naver account and like my work, please do rate the webtoon and leave comments. It means a lot.

Me as you flee my overwhelming awesomeness.

In a recent story arc for one of my favorite webtoons, 간떨어지는동거, a Korean slang is featured as the title. Several chapters in a row are titled 마법, or magic.

But this arc isn’t really about magic. It’s actually about the female protagonist getting her period – which in Korean slang is referred to as 마법. Yeah, that’s right.

END_OF_DOCUMENT_TOKEN_TO_BE_REPLACED

Recently I came across an interesting differentiation between entry-level workers in Korean companies and employees who might be new to the company but not new to the industry. The former is called a 신입 사원, and the latter is a 경력직 or even 경력직 사원.

But it’s important to draw a distinction between these titles. While it’s quite common for a new hire who has never had a job before to introduce themselves as a 신입 사원 (신 new, 입 entrance/to enter, 사원 employee/worker), it’s unlikely that someone who was hired with experience in the field or industry is going to call themselves a 경력 사원.

Instead, as I encountered in the original sentence from 언어의 온도 by 이기주, they will probably talk about having transferred or moved companies.

“He transferred companies as an experienced worker…”

This worker’s value and type of entry to the new company was based on his experience, or 경력. 직 comes from a Chinese character (職) meaning post or position.

Some other office- and company-based vocabulary:

Most office and company-based vocabulary have associated hanja, so look for similar syllables and characters to help you remember their meaning.

For example, 출 is to head out or embark while 퇴 is to leave something or somewhere (출발, 퇴학). 경 relates experience (think 경험, 경력, etc.). 력 refers to ability (능력). 실 is associated with rooms (화장실). 회 is community or group (사회), and 식 has to do with food (음식).

Looking for a way to practice this vocab? A great office K-drama is Misaeng, or Incomplete Life. You’ll hear all these words and more in every episode.

The more of these building blocks that you learn, the easier Korean vocabulary will become. It’s a puzzle – all you need are the pieces and you can put the meaning together.

Do you like Korean nine-tailed foxes, unlikely accidental cohabitation between love interests, and blunt humor? 간 떨어지는 동거 is the webtoon that falls next on my list of favorite webtoons (after Spirit Fingers, of course) precisely due to these features.

Now make them collide on the street so that the gumiho’s fox orb slips from his mouth into hers.

Oh, darn. Guess they have to live together END_OF_DOCUMENT_TOKEN_TO_BE_REPLACED

If you don’t know the culture, you’ll never truly know the language. Don’t just look at a textbook. Watch the dramas, the movies. Listen to the music.

Language learning is all about engaging with the culture. And recently, I encountered a great example of why cultural knowledge (historical, current, popular – any and all forms of cultural knowledge) is key to linguistic competency.

In a group chat with well over a dozen native Koreans, I’m a quiet American. We mostly talk business opinions there – should we start this new side project, how should we respond to this request for promotion, what are our stats for last month. That sort of thing. It’s my unofficial training ground for the kind of Korean that I never got around to learning in college: business Korean.

So, sentence by sentence, I pull it apart. And then I run into a word I cannot find anywhere.

Green. Everywhere, green. Green baked with South Korean sunshine. The fresh, clean scent of mountains clad with green tea bushes. And heat. Oh, yes. At ten in the morning, it was brutally hot in the green tea fields, and it was only getting hotter.

Rewind about twenty hours. It was midsummer in 2015. I was on a bus leaving Seoul, heading into the countryside in search of the famous Boseong Green Tea Fields (보성녹차밭). END_OF_DOCUMENT_TOKEN_TO_BE_REPLACED

The Spring 2018 Edition of Nabillera, an online literary magazine that provides translations of contemporary Korean literature, is out, and it’s a great one to check out if you’re new to the scene (or if you’re an old hat, I guess you’re welcome, too).

The Spring 2018 Edition includes short stories and poems as well as interviews with four different Korean authors. It’s great for anyone interested in contemporary literature, Korea, or issues of gender and sexuality; this edition is called “Queer Literature of South Korea“. The previous edition, from Fall 2017, is also available via the “Past Issues” tab on the Nabillera homepage.

Full disclosure – Nabillera was started by a fellow translator/proofreader from my Humans of Seoul translation team, and he has done a fantastic job of selecting contemporary Korean writers to share with an English-speaking audience. I’ve done a little bit of proofreading for some of the translations, but the heavy-lifting is all his and his volunteer team! As he is a full-time college student spearheading a substantial literary translation project, this edition is nothing short of an exceptional achievement – especially since the Korean writers are paid an honorarium.

If you enjoy the work that he and his team at Nabillera are doing, please help support the publication of the next edition.